It's a 'flying motorbike'! Impressive homemade drone takes off with its Chinese inventor on board 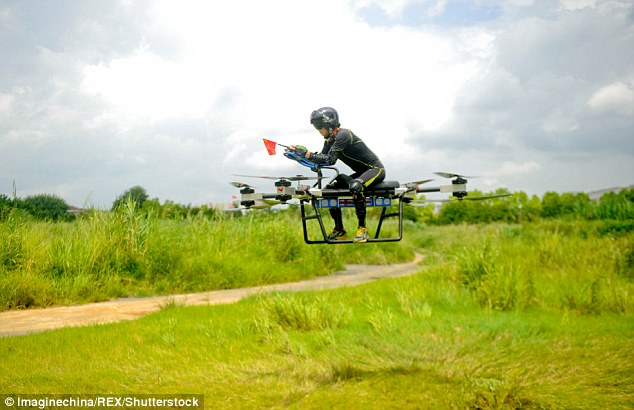 A homemade 'flying motorcycle' has taken to the skies, with its inventor on board. Zhao Deli, 40, was lifted into the air by eight propellers in Tangxia town, Dongguan city, south China's Guangdong province. Mr Zhao designed and built the drone himself and - dressed in an all-black protective suit - embarked on the extraordinary flight test on Monday. The drone's propellers are affixed to a central frame which is designed to be as lightweight as possible.

The aircraft has a motor installed under the seat, which provides the power for the drone while the rider perches at the top. Before Monday's flight, the amateur inventor had put the unusual aircraft under unmanned tests for 1,559 times in the space of two years. With the eight propellers stirring the air and the motor roaring, Mr Zhao's flying vehicle successfully carried him into the air. After a safe landing onto the ground, the excited Mr Zhao told a reporter from Guangzhou Daily: 'It was like riding a motorbike in the sky. 'My dream has come true after this 1560th flight test.'

A video on Chinese news site Sohu shows the man leaning forward with his hands on a control panel at the front of his contraption. Seconds later, all eight propellers start to spin and lift Mr Zhao into the air. The man-carrying quadcopter levitates in the sky and lands safely on the ground. He has named the drone 'Jin Dou Yun' or 'Magical Cloud' - a flying cloud ridden by China's very own fictional superhero, Monkey King. Mr Zhao claimed the flying bike could carry a load of between 110 and 220 pounds (50 and 100 kilograms). Its maximum takeoff weight of 564 pounds (256 kilograms), top speed of 44 mph (70 km/h) and battery life of 30 minutes make it a market leader, said Mr Zhao.

Mr Zhao was born in a village in south China's Hunan Province. Like most boys, he has always dreamt of flying in the sky one day. He aced in science subjects at school and enjoyed fixing electrical appliances at home. In 2008, Mr Zhao set up a company to sell the drones he invented himself. By then he had invented five drone models, including a petrol drone. Two years ago, Mr Zhao read about a hovering surfboard in Canada, and that was where he got the inspiration for the 'flying motorbike'. Despite his enthusiasm, Mr Zhao's road to success was by no means smooth.

He experienced countless failures while trying to make the unmanned aircraft airbourne during the 1,559 flight tests; he even had to sell his house and borrow money from friends in order to fund his project, it is reported. The inventor was ecstatic after Monday's flight. He said he hoped to fly across China's Yellow River on the aircraft. He also planned to modify the 'flying motorbike' before launching it as a commercial product on the market. 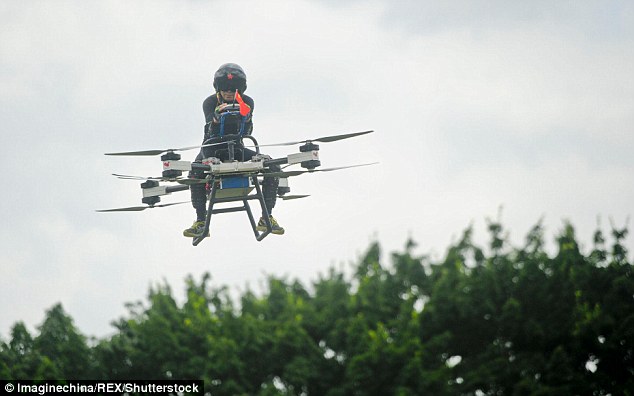 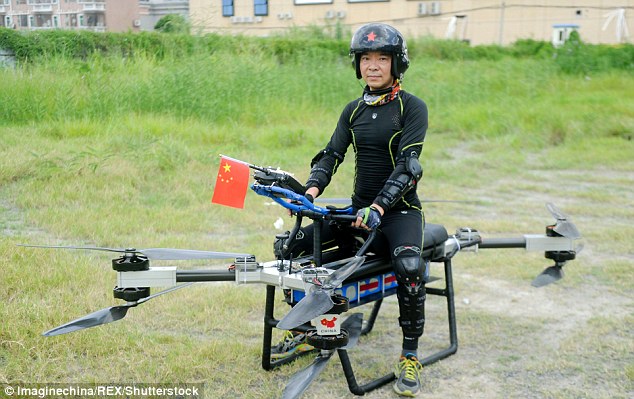 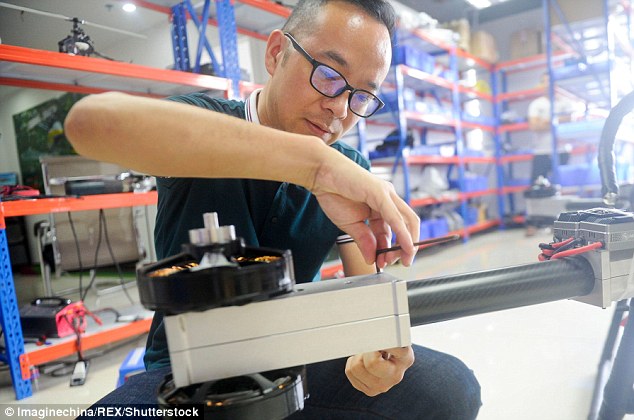 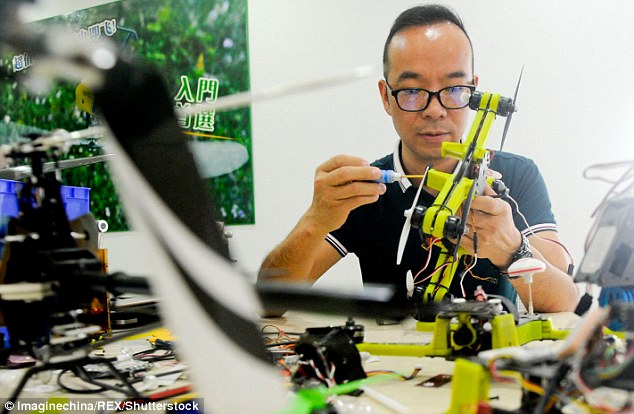 I want to get it one

you make my day 😆 , but it's like dangerously...the blade, like sharp..we can using it to cut something 🙄  😛

amazing invention, I hope I'm not afraid of heights to ride it 🙂